While I have no kids of my own yet, I'm notorious for always having a special something for my niece and nephew every time I see them. Yep, I'm that Aunt. *shrug* So now, every time they see me the first thing they always ask is "What did you bring us??". And they will continue to ask until I either give them whatever I brought or until I put all of my stuff down and they see that I really did come empty handed.

Because I've been bringing them these "surprises" for so long, they now associate that with me. So much so, that they've now come to expect something from me every single time they see me.

I don't know about you, but I expect God to do all that and THEN some! That's not to say that He will give us every single thing we want or ask for (because ultimately He knows best), but my faith says that I still expect him to because that's just the kind of God He is. 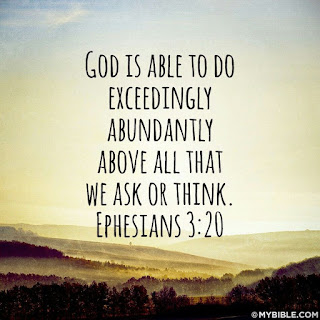 While I may get bothered sometimes by my niece and nephew constantly grilling me and expecting me to have something for them, the dope thing about God is that He never does. He WANTS to give us good things. He WANTS to be there for us. He WANTS us to put our faith and trust in Him. He WANTS us to expect Him to be who He says He is. Because that's who He will forever be.

And what's ironic about it all is that even when my niece and nephew are already expecting me to give them something, when I actually do they react as if I just gave them a million dollars. No matter what it is, they will get extra excited and say things like "thank you! you're the best!" or "you're the best Quitia ever!". As if they are shocked that I did what they were already expecting me to do lol. How many of us can relate to that? We pray these big bold prayers and expect God to do all these great things in our life; we name it and claim it. Then when He actually does we react as if we're shocked or surprised? As if we had enough faith to trust that He could but we weren't too sure if He actually would.