Warning: This message isn't for everyone, but that's okay, because it's for someone. If that's you, stay with me or you just might get lost.

So, late August - You may or may not know that I recently began offering publishing assistance services. Well, I got a request for services right as school was starting. Deep down I really didn't want to accept it simply because of how busy I was (and still am) with work. I didn't want to commit to something that I wouldn't be able to give 110% to. BUT - I also didn't want to turn down my very first "official" potential client. Because let's be real, you never know if or when you'll get another opportunity to do what you've been wanting to do. So I accepted. And looking back I'm glad I did.

Late September/Early October - The process had become tiring, time consuming, more work than "fun", and was taking way longer than I had expected with my busy work schedule. I felt like I was failing on doing my part. But I kept persevering even though I really just wanted to quit.

October 17 - Client emailed me saying that someone hit her up about publishing a book and she told them she would give them my info when they were ready. She also went on to say that I'm good at what I do and how appreciative she was. That email meant more to me than she knows. (s.n. we just wrapped up our contract and I'm so excited for her and her first book!)

October 18 - God dropped this Word in my spirit:


October 21 - It was just one of those days. But instead of wallowing in my feelings and allowing my emotions to overtake me, I took it to God in prayer. I asked Him to show me a glimpse of all that He has waiting for me on the other side of what I'm dealing with in my present. Because I KNEW there had to be more. That couldn't be it. Also because..."eyes haven't seen, and ears haven't heard..." (1 Corinthians 2:9)

October 22 - While headed to work a song titled "I'll Just Say Yes" by Brian Courtney Wilson popped up on my youtube. I decided to give it a listen and immediately fell in love with the lyrics and how well they correlated with the message God had dropped in my spirit just a few days before. I got to work and had prayer with a coworker friend. Afterwards, she began prophesying to me about different areas of my life and was spot on with confirmation (which was nobody but God because I have never shared any of my personal life with her ever). Her words may or may not (read: may) have been an answer to the prayer I had prayed the night before asking God for a glimpse into my future.

Sometimes we ask God to answer our prayers one way, but if we're not careful, we'll miss His answer simply because it didn't look how we expected it to look.

All that day she and another coworker friend began indirectly comparing me to Jonah in the Bible. That night during my quiet time I decided to read the book of Jonah. Ya'll, Jonah basically ran from God and did THEE most, just to end up doing what he could've/should've done from the very beginning and bypassing all the trouble he put himself and others through.

October 23 - My coworker (not knowing what I had read the night before) knocked on my classroom door as I was sitting at my desk and said "Good morning Jonah!". I was done on that note lol #FULLCIRCLE

Also that morning as I was listening to a sermon by Steven Furtick titled I Caught a Thought the musicians began playing "See a Victory" by Elevation Worship towards the end. I looked up the song and had it on repeat all day. I went home that night and began watching a sermon from Sarah Jakes Roberts titled Carry It. It came from John 5 - the story of the man at the pool who had been an invalid for 38 years and when asked if he wanted to be made well, told Jesus that He had no one to put him into the pool. Not realizing what Jesus was really asking him. I encourage you check out the full sermon, but in short, it was basically a message to stop sitting on what God has placed on the inside of you. You have everything you need to fulfill what God has called you to do. All you need to do is pick it up and carry it/walk in it.

THEN, as she was wrapping up her sermon, the musicians began playing "See a Victory" as well (the same exact song from earlier!) and the whole crowd ended up singing it in unison.

October 24 - I came home and turned on yet another sermon (because sometimes you just need to hear a Good Word...or three) by Steven Furtick titled Trust Me I'm Trying, and guess what scripture he immediately starts reading from?? John 5! (man at the pool again)

Ya'll - I am SO done with God and His crazy, intentional faith moves right now! He has literally been blowing my mind for like the past two weeks, and all I can say is "OK, God! I see YOU!", and also.... "Shut up!" lol

One thing the Holy Spirit has reminded me in all of this is that even in the midst of chaos, struggles, and uncertainty - we can trust that God is still moving and still giving signs that He's near and He's working on our behalf. We need only open our eyes. (I blogged about that here)

The struggle may be real, but the promise is bigger.

The molding may feel like breaking, but you won't be defeated.

The pruning may hurt, but the process is going to allow you to help someone else one day.


In the natural, sometimes it may look and feel like I'm not growing or getting any better. But in the spiritual, I literally can feel myself getting better. I can even see it. And sometimes, you just have to pray and ask God to allow your natural to line up with His spiritual.

That's a word for someone right there.... it may look and feel like you're getting worse, but you're actually getting better. You just have to shift your focus and realign your mindset to His will to be able to see it.

Allllllll of that to say, I've been feeling like Bruce Almighty with all of these nonstop signs and confirmations and full circle moments I've been receiving. And they are STILL coming! It's crazy and almost impossible to adequately articulate with words, but it feels amazing. I'm here for ALL of it.

A few weeks ago I was praying and telling some friends that I wanted to see glimpses of God in every part of my life, and here we are. I'm convinced that God really does have a sense of humor, His plans are perfect, and every move He makes has goodness and purpose written all over it. Some people will say it's just a coincidence, but when you truly know God and how intentional He is, you wouldn't dare give anything else His credit.

They say be careful what you ask for because you just might get it. Well - I see You, God. I see You. 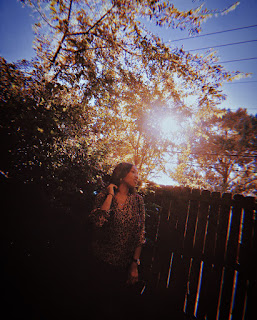